If the Philadelphia media doesn’t like you, they’ll run you out of town.

And, in rare instances, it happens to an elite player in the prime of his career.

DeSean Jackson is arguably the biggest playmaker on the Eagles’ roster. His freakish athleticism might make Wally West (look it up) blush. He can run by virtually every corner in the NFL. He can field punts. He can catch passes out of the backfield, line up in the slot and create all kinds of havoc and matchup problems for opposing defensive coordinators.

In addition, Jackson has not-so-quietly established himself as one of the greatest wide receivers in Eagles’ franchise history. He ranks third on the all-time list with 6,117 receiving yards, trailing only Harold Carmichael and Mike Quick. Impressive company, in just six NFL seasons.

Ahh, but where’s the rub? There is a rub, right? 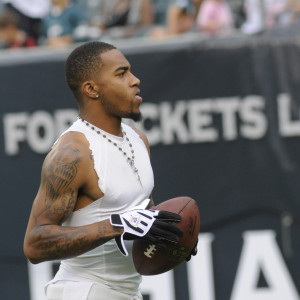 Jackson has made rap videos. What’s the trade value in that?
Credit: Rikard Larma

Here it is: the Philadelphia media doesn’t like DeSean Jackson. More aptly, they simply don’t understand DeSean Jackson. And now they are proposing a plan to run him out of town, via a trade. The rumors seem to have stemmed from a Twitter exchange back on March 1. What began as an innocent – and totally plausible – scenario immediately morphed into full on “drama.” Thanks, Howard Eskin.

The local scribes, mostly older white gentlemen, find fault with his obsession with penning rap verses and starting his own record label. Instead of seeing it as a potentially successful side business, it has been deemed a distraction, an excuse to hang out with Snoop Dogg in the offseason.

When Jackson’s South Philadelphia home was broken into and robbed over the winter, the receiver was painted as an enabler, not a victim. How dare he go on vacation and leave his property unattended. Words like “immature” and “reckless” were dangled as adjectives in front of his No. 10 jersey.

Those same words were engraved in headlines again when Jackson merely suggested, after the most productive season of his career, that he might deserve a pay raise. That was quickly translated: “DeSean Jackson demands new contract.”

No, he did not. Watch the YouTube clip of the interview. Better yet, ask his coach.

“He didn’t ask for a new contract,” Chip Kelly told reporters Wednesday. “I think he was asked the question in the locker room post-game. But DeSean never came to me, Howie or anybody saying he wanted a new contract.

Look, no one is saying DeSean Jackson is Jerry Rice, the unassuming perfectionist who lived and breathed football 24/7 and avoided controversy like the plague. Jackson will speak his mind at times, yell on the sidelines when he’s upset, and showboat for the cameras — who can forget the goal-line fumble in Dallas? All little risks for huge rewards.

If you want to dislike Jackson, fine. As Bobby Brown famously crooned, it’s your prerogative …

But trading him? Don’t be cruel.