Here’s hoping Philly gets the one certainty this draft will offer: Lights-Out Shooting

Your Philadelphia 76ers are the perfect example of just how chaotic life in the NBA can be even when mired in its ho-hum purgatory. Just three years ago this franchise was one win from appearing in the Eastern Conference Finals against a Miami Heat team that was still in search of its first league championship with the Big Three.

Today, a revamped team that has already been through two major facelifts under new management since the aging Boston Celtics were stretched to a Game 7 in those Eastern semifinals — the first being the acquisition of Andrew Bynum; the second beginning with the trade of all star Jrue Holiday during the 2013 draft, continuing with the 2014 midseason deals of namely Spencer Hawes and Evan Turner, and perceivably ending tonight with the 2014 draft — is on the brink of yet another watershed moment in what has basically been a basketball disaster since Allen Iverson left town. We all know the team’s only significant playoff run since the “Answer” departed against the Celtics and the Chicago Bulls in 2011-12 was only made possible by the injury to then league MVP Derrick Rose during the East’s quarters. 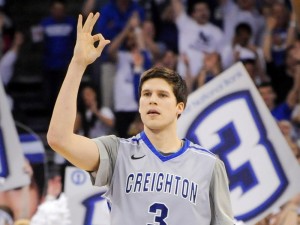 McDermott isn’t one of this draft’s Big Three, but he hits Big Threes, and whoever drafts him will be instantly better for it. Photo credit – USAToday.com

That’s where the recent certainty ends in regards to organization, aside from what will certainty be a chaotic evening and wee hours of morning time Friday. Consider the chaos of just the last several weeks, a time period in which no basketball has been played in Philadelphia: Almost mathematically assured of no worse than the No. 2 pick in the 2014 draft after finishing with the league’s second-worst record at 19-63, just four off the pace of Milwaukee for the most ping pong balls, the Sixers (and the Bucks for that matter) were leaped by Cleveland when the Cavaliers scored the top pick and dodged the odds of having just a 1.7% chance of doing so despite having more wins (33) than eight other teams. Still, hope remained in tact that the Sixers would end up with either Andrew Wiggins or Jabari Parker, the two top-rated consensus picks as early as the earliest of mock drafts started in 2013, as Wiggins’ former teammate Joel Embiid continued to see his stock rise despite a back injury that kept him out of the spring’s NCAA Tournament but reportedly in the Cavs good graces at No. 1.

Today, as we stand mere hours from what would still appear to be a No. 1 selection by Cleveland, there’s really little that I or you can try to accurately predict what the Sixers will do with their first-round selections of 3 and 10 now that Embiid has come down with a second major ailment and reports mount that the Cavs have distanced themselves so far from him that they are more likely to trade their pick away than do anything else. This places the Sixers, reportedly most interested in Wiggins and vice versa in an even more precarious position at No. 3 as now more opponents come into the limelight with trade offers to move to No. 1. And with that, questions abound: Will the Sixers keep both picks? Will they trade both? And, of course, who should/could they take whenever they do take to the podium? This just scratches the surface of the rapid-fire questions we will all be asking ourselves even before we entertain what they’ll do with the as-of-now five second-round selections they possess.

What we can do, however, is solidify our own wish lists, which I’m offering here. I’m calling it my Mc’Bucket’ List because I’d like to see this organization have another promising draft before I die. (And I reserve judgment on last year’s class, which as of now is tough not to like, until the Nerlens Noel project plays out and we see if the Sixers retain Rookie of the Year Michael Carter-Williams). Here, I explain further:

With the first wish in his 2014 NBA Draft McBucket list, Joe D selects: Let someone else draft Embiid in the top 10.

No matter where they end up choosing from with their first choice, the Sixers are not the ones who should risk taking the former Kansas freshman big man. I’m not writing him off completely at this point, but the foot injury on top of the back injury has me thinking that he needs to be someone else’s high-risk/high-reward project. 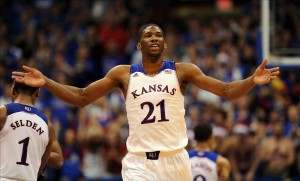 At this point, when you draft Joel Embiid you get nothing more than a curious shoulder shrug. Photo credit – Forbes.com

Looking all the way back to a few weeks ago, when almost unanimous popular theory held that this draft’s own Big Three featured some order of Embiid, Wiggins and Parker, I had maintained that Embiid was the distant third not just based on what has now quickly become an injury history but due to his lack of overall basketball experience as compared to the other two, even considering their youth. In the vein of experience, I can’t help but conjure up thoughts of former Sixer Shawn Bradley, who prior to being drafted No. 2 in 1993 had spent two years on a church mission trip which surely fulfilled him on many spiritual and human levels, I’m sure, but it also left him emaciated. While Embiid stands at a more muscular 7 feet and 250 pounds than that Human Tree did at 7-foot-6 (go figure) and 235 pounds, his similar lack of playing time — he reportedly only learned the game of basketball a few years ago — could mean his body quite simply isn’t built to be basketball savvy. Making matters worse, it’s probably fair to assume that as a more seasoned beach volleyball player, his foot injury could actually be the result of too much wear on his navicular bone to permanent proportions.  He likely needs to add some weight to be an effective NBA player, and neither the back nor the foot injuries will be aided by that.

If you take Embiid in the top 10 you are inflating the parameters of the project he presents, and the aforementioned Noel is project enough for the Sixers right now, especially when considering the luxury of having the fan base to this point overwhelmingly buy in to the “Together We Build” mentality. People seem willing to wait for management to enact its grand plan (without purchasing season tickets, mind you), but that doesn’t mean using another top 10 pick on a guy who will at best be a nonfactor toward your rebuild for at least one season makes a lot of sense. Not from an on-the-floor standpoint, and not from a public relations standpoint, which I understand counts only to a marginal extent. The risk overall is just too great for a team that needs to solidify a young core so that it can be a player in the free agency market this year or next.

Now, if the Sixers were to somehow end up trading out of the top 10 to take a chance on Embiid as part of an overall agenda I would become less concerned. That’s not because I think Embiid has a great chance to be healthy long term, but rather in that scenario they would have more opportunities to hedge their bets with additional picks.

That said, with the second wish in his 2014 NBA Draft McBucket list, Joe D selects: Take Doug McDermott wherever you pick if Wiggins and Parker are off the board.

Now, I know that neither the Sixers nor anyone else is going to take Creighton University senior Doug McDermott as early as No. 3. But that’s less about it not being an appropriate pick to make and more about teams not being able to help themselves from going after the perceived “highest ceiling” instead of playing the “safe bet.” 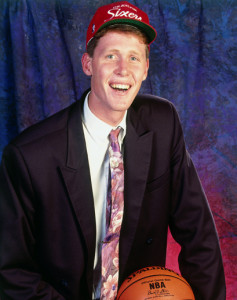 And that’s what McDermott, a three-time All-American and 2014 Naismith College Player of the Year, represents. I don’t care if you’re a team with essentially unending glaring holes such as the 76ers are or if you’re the continuing dynasty team that as of today will be favored to win the 2014-15 title that is the San Antonio Spurs, you instantly improve your worth when you draft a guy who can shoot as well as McDermott does. Forget about overall scoring ability, even if he goes on to become the worst-case scenario, spot-up shooting, poorly defending forward who can’t create his own shot or effectively score in the paint (an unrealistic finality for sure), you could do a lot worse than “Dougie McBuckets,” especially at No. 10, where most draft analysts project McDermott should/will be selected. If you don’t believe me, take a look at the players selected in the 10th spot since 2004 and ask yourself if you wouldn’t trade most of them straight up for any spot-up shooter you can trust to hit a shot at the end of a game for you.