March 23, 2018 Comments Off on With Jake Arrieta, Phillies Season Could Be “Wild”

*This article was amended after the signing of Scott Kingery.

And just like that, the “rebuild” is over for the Philadelphia Phillies. Yes, the recent signing of starting pitcher and 2015 National League Cy Young Award winner Jacob Joseph Arrieta has bookended what the December acquisition of free agent first baseman Carlos Santana initiated: the ceasefire of the financial sabbatical for Major League Baseball’s most-profitable team. And you thought the owners were going to wait for what was being rumored as the free agency renaissance of 2019? Pfft …
Ok, let’s be real here, financially speaking: these two offseason free agent signings are still typical Phillies frugal in nature. At $75 million for three seasons (his ages 32-34 years), the Arrieta contract in particular is a result of league-wide stalemate of sorts, although some may be calling it collusion, that has seen reduced value for veteran free agent players. Yes, in total the Phils could owe Arrieta as much as $135 over the course of four years, if either the pitcher or the team decides to enact options and/or if Arrieta meets certain performance incentives — one of which is reportedly saving the world. The 31-year Santana, meanwhile, has the club on the hook for $60 million for three seasons (which includes a $10 million signing bonus), with a club option available in 2021 at a reported $17.5 million.

If neither of these contract scenarios has you crying poor mouth for these guys, that’s understandable. But it’s not the big picture as to how they translate in a dramatic change of heart for the Phillies ownership and front office. The big picture is really that since both Arrieta and Santana entered the market having turned down one-year qualifying offers, which are calculated using the mean salary of the league’s 125 highest-paid players, of $17.4 million, that their previous employers, in this case the Cubs and Indians, are entitled to compensation draft picks. That entitlement comes straight from the Phillies’ pockets as well, if you will, and in the case of Santana will actually cost them their second round draft pick. (The Indians will take this selection in what’s now known as Competitive Balance Round A, which occurs after the first round.) The Santana signing also resulted in the Phillies forfeiting $500,000 in their International Signing Bonus Pool allotment. That tab now reaches $1 million in foreign funds with the Arrieta signing, which also costs the team a third-round pick, as the Cubs will earn their compensation in Competitive Balance Round B, which occurs after the second round. 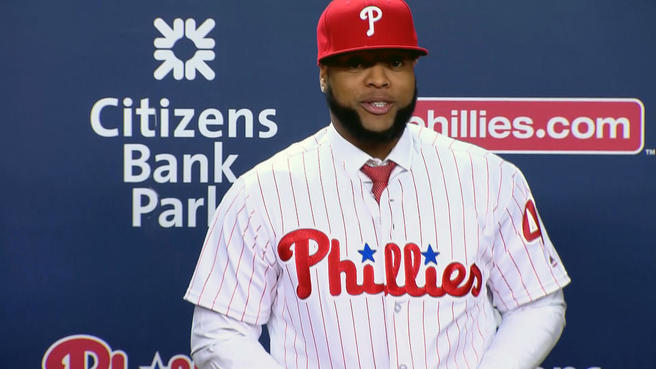 The Phillies didn’t just bring Santana in to be a mentor and pawn.
Photo copyright of Home Run Daily

And while the Arrieta deal on its face may appear to be the one move in particular this winter that most signifies the Phillies’ renewed penchant for spending (the club also corralled 37-year-old reliever Pat Neshek with a two-year, $16.2 million deal in December and fellow bullpenner Tommy Hunter, 31, to the tune of two years and $18 million), it really just proves that they want some insurance for sticking their necks out for Santana. (And then there’s that nearly unprecedented deal the club gave rookie Scott Kingery.) Because it is he who truly represents the changing of the financial guard. Of course, the narrative there is that Santana was brought in to mentor the younger players — namely third baseman Maikel Franco and his always-getting-his-money’s-worth approach at the plate — in an effort to continue what might have otherwise have been an unending 76ers-like processing of a rebuild, but let’s face it — that $60 million was basically headed right down the shoot for the present tense if a true ace were not brought in to lead a group of youthful starters currently in the stable. Seriously, what good was a potentially potent, young, inexpensive lineup going to be worth in wins and morale on the diamond if the starting rotation had little proven stability (apologies to Aaron Nola, who is not being discredited with that statement)? What sense would it have made to waste a year of Santana’s play, not to mention another wasted, team-controlled year for the likes of Nola, Rhys Hoskins, Nick Williams and Jorge Alfaro? Would it really be ideal to have Odubel Herrera play out nearly half of his extension on a team actively not trying to contend? Would it be wise to shoulder shrug at Franco’s first arbitration-eligible season? What about Aaron Altherr, whose last year under team control is this coming season? It just doesn’t make sense, in the pure baseball sense as well as at the financial level, to not try to win as many games as you can when you have a young core like the team now does. They are only going to get more expensive to keep together if the majority of them pans out. And the Phillies realize that. 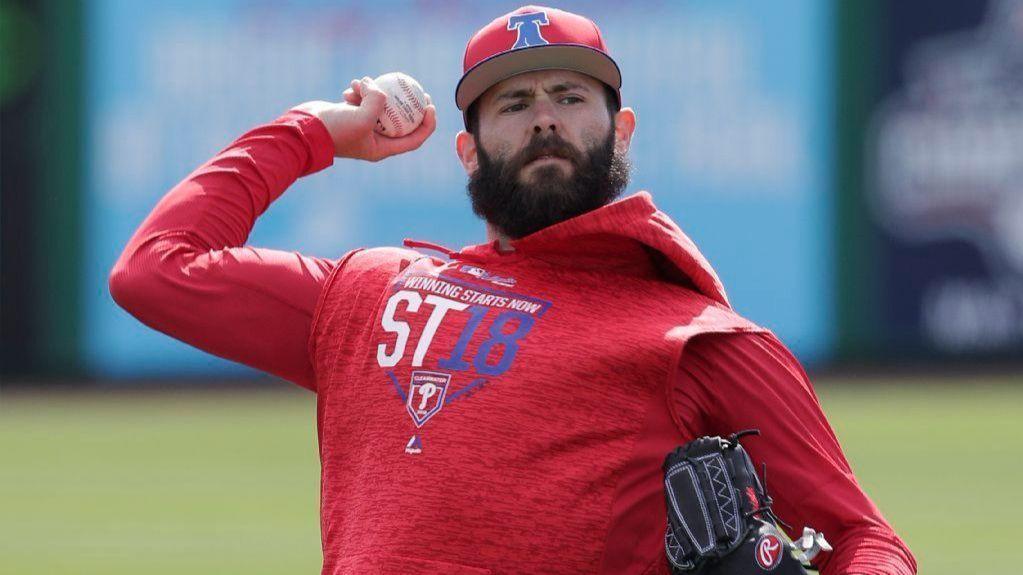 With Arrieta, the Phillies have an ace and an experienced winner/World Series champ.
Photo copyright of The Morning Call.

Or, perhaps John Middleton was encouraged to keep his payroll buoyed because of his hopes of trying to jump on the never-ending party-like scene that the first Super Bowl by our Philadelphia Eagles has wrought?

Regardless, the Arrieta signing absolutely makes this team a postseason contender as Spring Training comes to a close, even if he’s only one uninspiring spring start into his Philly tenure after taking a two-inning loss to Detroit on Thursday. It took all of 87 wins to lock down the second National League wild card spot for Colorado last season, and the NL East is essentially just a four-team race with the Marlins quitting contention with their umpteenth “rebuild”— and this is being somewhat unfair to the Atlanta Braves, who have some great young talent, even if they’re shamelessly keeping some of it mired in the minors.

The odds makers sort of agree with this premise, too. Now, don’t laugh at the 65/1 odds that they tend to sit at right now. It’s the fact that some odds makers had them as high as 120/1 as recently as Nov. 9, which does at least reflect a time from even before the other free agent signings.

Does all of this mean we should be planning pinstriped parade routes for next fall? Hardly. Does it mean the Phillies should contend this year in every sense of the word? Of course. And that’s the way it should be.