Time to Give Howie Roseman Some Real Credit

May 14, 2017 Comments Off on Time to Give Howie Roseman Some Real Credit

There are two words that should resonate and reverberate in the minds of all Philadelphia Eagles fans following the NFL draft and the performance of general manager-type guy Howie Roseman. And that is “job security.”

… Wait, please don’t tell me you thought I was going to say “Super Bowl”?

No, Roseman and the Birds are not quite ready for that vocabulary yet. At least, presumably not on paper, when considering that the NFC East alone includes at least two legitimate bowl contenders in the Giants and the Cowboys who appear to be in a better position to claim playoff positions in 2017.

Instead, the selections that Roseman went with in our host city’s draft — most notably related to the “safe pick” of defensive end Derek Barnett (he of the yet-to-be signed variety) and cornerback Sidney Jones (he of the injured variety) — seem to project a confidence that had formerly been lacking by the 41-year-old executive. By choosing not to take a risk in Round 1, a rather flashy series of selections that resulted in a number of picks that by and large went against the grain of the millions of mock drafts we were exposed to (for what that’s worth), Roseman’s actions communicate that he doesn’t need to stick his neck out … yet … despite the team’s current postseason hiatus. His drafted players are also collectively a pretty clear indication that he doesn’t seem to feel like he’s on a hot seat despite only being a couple years removed from being sent to the front office’s broom closet. If that doesn’t portray enough proof of the safety net that Roseman appears to be swaddled in, then the selection of a guy who plays what’s arguably the team’s most significant position of need when he’s healthy, an adjective that most likely won’t accurately define Jones until 2018, should provide enough clarity. 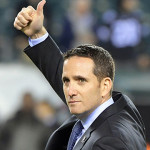 Howie Roseman no longer acts like a guy worried about losing his job. His drafting strategy and acquisitions reflect that.

Especially when also assuming that for as “safe” as the Barnett selection appears to be, he is not expected to be a Day 1 starter. When considering the significance of these top two selections as a whole, the message from Howie seems to be as follows: I am concerned about our defense, so we used our first two picks on that side of the ball; however, I feel secure enough with my job status that I’ll have some time to see things through as I construct a plan to let my offense try to win as many football games right now as we possibly can. For a sports town in which the masses by and large seem to only be giving the basketball team’s former general manager an endless leash on which to walk his process along, this may not be a well-accepted reality as we approach training camp. Still, as someone who has not been the biggest supporter of Roseman during his tenures of fluctuating responsibility with the organization, I am here to pledge a willingness to give him the benefit of any doubts I’ve had of him during his seasons of managing contracts and player personnel because I think he’s finally got a plan in place — a plan that goes beyond treading water for my dramatic boss just to hold down the job he’s always tied to address for himself through the media. I think we’re about to see a guy who’s track record shows a history of some gumption as a businessman in general take some gumption in how he handles himself as the orchestrator of what we hope will be the next real era of Eagles football.

Roseman is no stranger to having to bide his time. His mere existence in the NFL is due mostly to a relentless mentality to get what he wanted despite the odds against him. As a high school student living in New Jersey, a young Roseman planted the seeds to his NFL career when he started sending letters to NFL owners about his interest in working for them. (Take note, millennials, ignoring real mail back in the day was much more difficult than deleting email is today, even if accessibility to people seems heightened.) His efforts to get a foot in any NFL door continued during law school and college, and in 1999 he was interviewed by the New York Jets for a job in the player personnel department — a job that he did not get. However, Mike Tannenbaum, then the Jets’ director of pro personnel, promised him a positive recommendation in the event that any other executive asked. Not long after, former Eagles’ executive Joe Banner came calling. Roseman was brought in as an unpaid intern asked to conduct research on potential draft picks, and the rest is a chaotic history that initially saw him rise through the administrative ranks before some inter-office shakeups resulted in one of the best examples of an NFL executive soap opera that this town might ever see. In 2010 owner Jeffrey Lurie named Roseman general manager after Tom Heckert took the GM job in Cleveland, where Banner would also end up two years later as the club’s CEO. Banner’s departure from the organization was not a graceful one, and accusations that the organization wasn’t being managed appropriately negatively reflected on Roseman, even though former head coach Andy Reid “was essentially the GM” from the time he was named executive vice president of football operations in 2001 up until his 2012 firing. Laurie’s curious doling out of titles and responsibilities remained unevenly consistent during the subsequent tenure of Chip Kelly, who at this point was probably hired only because Lurie wanted to get one over on the Browns and Banner, who had reportedly come close to convincing Kelly to leave Oregon in 2013 before he ultimately chose Philly. The helter skelter descriptions of Kelly’s and Roseman’s titles and responsibilities during their time “together” further added skepticism as to who has been most to blame for the Eagles inability to play in January since 2013.

The truth of it all is that Roseman bears some of the blame, but only some. And that’s the fault of nobody other than Lurie. So while I still harbor disdain for Roseman’s knee-jerk (and expensive) signing of quarterback Chase Daniel last offseason — it was never a good enough excuse to do so just because Daniel played under Doug Pederson in Kansas City — and for trading away running back DeMarco Murray — possibly only because he played under Chip Kelly (or basically the Daniel contract forced Murray out) — I think we’re seeing Roseman taking his current opportunity as one in which he doesn’t have to play along with the company-guy mentality that Lurie has seemed to treasure since buying the team 23 years ago. Yes, Roseman’s fingerprints are all over the Dream Team of 2011, the drafting of Marcus Smith and for any transactions that went down in any other year of his GM-like status save for calendar year 2015. His trading of cornerback Eric Rowe is a big reason the defensive secondary is as depleted as it is today. The contract he gave defensive end Vinnie Curry may turn out to be forever a poor choice, but any holdout that might happen by fellow line mate Brandon Graham will not be as a result of the Curry deal. It will be the result of greed and not following through on a contract signed prior to Curry’s deal. (Inflation is a jerk, Brandon, dry your tears on your millions.)

Besides, Roseman’s slick tactics in moving up the draft board in 2016 to select Carson Wentz and his sense of urgency in getting his young quarterback veteran receivers Alshon Jeffery and Torrey Smith this spring are the types of moves that make me think he’s thinking more like a guy who wants to try build a winning team, not just a team that will win enough games to save his job. And that’s what Philadelphia’s football team has needed since Kelly was running the show. But, yeah, that’s a whole other story :/