You’re probably thinking, is this a thing? Like, a serious thing that people celebrate? Well, a firm “NO” to the latter, but this is something people apparently pretend to celebrate on Sept.28. The only reminder I needed was waking up this morning to see #DrinkBeerDay trending on Twitter. That, and a few more hundred shout-outs on my Facebook page, aflutter with another made-up holiday.

But … I like beer. And, if you’re reading this, then you like beer, too. So let’s honor this gloriously fictitious holiday in the best way possible. By talking about Jason Kelce. 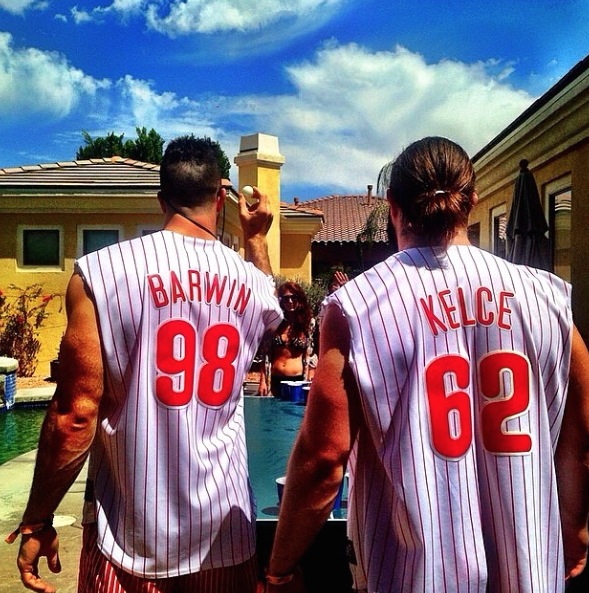 When the question is posed, about which Eagles player you’d most like to have a beer with, the answer is almost always Kelce. Not only does Kelce look the part – a trimmed-down Santa Claus at 6-foot-3, 295-pounds, with a firkin for a stomach –he has also been seen partying at the infamous Ocean Drive in Sea Isle City, as well as around town at several watering holes in Old City. A few years back, he even posted a picture of himself and Connor Barwin playing beer pong, draped in Phillies jerseys.

Rewind the tape to September 2012. At the time, I was still covering the Eagles beat for Metro, and Kelce was a locker room favorite of mine. He was always willing to give an honest quote and let reporters in on the mindset of the team. Since he was such a good guy, it broke my heart to hear the news that he was out for the season with a ruptured knee after tearing the anterior cruciate ligament.

I asked him, point blank, what he was planning to do for the next 6-12 months while he was recovering from surgery. Kelce, never shy with words, told me: “I guess I’ll be drinking a lot of beer.”

There you have it, folks. Jason Kelce, aka Philadelphia’s “Every Man.”

In other trending Beer News …

On Monday, news broke of a new craft beer concept coming to the old Yards Brewing space at 901 North Delaware Avenue in Northern Liberties. Craft Hall is the brainchild of Avram Hornik, owner of Morgan’s Pier and other frat-boy bars in Philly, and will focus on brews, breads and BBQ. Brewery consultant and local icon Scott Morrison will oversee the brewing operation there, according to the Philadelphia Inquirer. Meanwhile, Yards Brewing will move to their $19 million new facility at 5th and Spring Garden later this year.

While loyal fans will have to wait until Nov. 19 to watch their beloved Birds play the hated Cowboys in Dallas, we can start fueling the hate with a new beer: Dallas Sucks from Weyerbacher Brewing. This session IPA, brewed in conjunction with one of the best craft beer bars in Philly, Jose Pistola’s, weighs in at a crushable 4.5%, perfect for long tailgates and for toasting 61-yard field goals.

Speaking of kickers who could be cut tomorrow, did you hear Jake Elliott refused to accept a game check from Carson Wentz? The Eagles QB was overheard on video promising Elliott money if he nailed that game-winner last week. Elliott did the deed and now the two have worked out an agreement to donate the money to charity. According to NFL Network, Wentz’s game check is estimated at $31,764.71.

In nearby Delaware, Facebook founder Mark Zuckerberg was spotted dining at Iron Hill Brewery & Restaurant in Wilmington, DE. We are working our sources HARD to find out what he ordered! The Zuck, as I call him, doesn’t seem like the type of guy to order a flight of beers, so maybe a crisp Oktoberfest Lager from Iron Hill – unless he was going for more “Likes,” then he probably went with a trendy Pumpkin Ale. I know, I know, “Real beer nerds don’t drink pumpkin beers.” Drink what you like. Iron Hill has one of the best versions of that fiercely debated style in the country.

The Matchup: Eagles vs. Chargers

Every week we will attempt to break down the Eagles game with a matching craft beer showdown. For example, we briefly debated the merits of Kansas City’s Boulevard Brewing with those of Philly’s own Yards Brewing a few weeks back. This week, the Birds head to Los Angeles. But I still think of the Chargers as the pride and joy of (arguably) the best damn town for craft beer in the United States: San Diego. So I’m in a San Diego state of mind for this column.

Excuse this “beer reporter” as he takes a minute to sigh and lament on what could have been. Several years ago, I breezed through San Diego – it really does mean “Whale’s Vagina” – and didn’t hit a single brewery. Feel free to berate me in the comments – yes, I totally whiffed on visiting Stone, Ballast Point, Ale Smith, Karl Strauss, Alpine, Lost Abbey, Green Flash, etc.

For Sunday’s game, I am proposing the following battles. Carlos Slade, my friend in Beer Nerdom, will hopefully add his thoughts on tonight’s podcast.

On to the matchups …

Green Flash West Coast IPA: Big, bold Double IPA with Simcoe, Columbus, Centennial, Citra and Cascade hops. This isn’t your hazy juice bomb, but it is a perfect rendition of what a West Coast IPA should be.

Victory DirtWolf: This is a big boy beer weighing in at 9% with notes of citrus, pine, resin and tropical fruits. It is equal parts juicy a-d crisp, hopped aggressively with Citra, Chinook, Mosaic and Simcoe.

Jabroni Mike says: Bring a pillow and take a dirt nap with Victory. The ABV on this one will put you down, but you’ll get back up … eventually.

Ballast Point Grapefruit Sculpin: A tweak on their signature IPA, this easy-drinking pale ale packs a pulpy wallop with the tart freshness of grapefruit. Hey Carlos … What’s up ladies!

There you have it! It’s a perfect sweep for Philly from Victory Brewing (Downingtown, PA) and Levante Brewing (West Chester, PA). Let’s hope the Birds have similar success Sunday in sunny San Diego.