Of Flags And Fields

There were one million stitches in the most famous incarnation of the American flag, the one that flew over Fort McHenry and inspired the Star Spangled Banner. My stomach was tangled in twice as many stitches as I stood in the bowels of Lincoln Financial Field last Sunday preparing to unfurl our national colors before the Eagles-Vikings game.

I slapped Eagle logos under both eyelids, complimentary stickers meant to emulate eyeblack, and asked a stranger to take a picture of my Mom and girlfriend. The three of us had been selected to hold the flag during the national anthem, an honor the Eagles bestow upon longtime season-ticket holders and friends of the organization.

It was 3:40 p.m. Eastern time, about 30 minutes before kickoff, and the pomp and circumstance inside the stadium tunnel was fleeting, almost irreverently reverent. In one corner, a steely eyed event coordinator paced instructions like an auctioneer at Sotheby’s against a backdrop of bedazzled cheerleaders rehearsing new routines. Across the hallway, an over-the-limit teenager stumbled in handcuffs while security guards threatened to revoke access to anyone who seemed too intoxicated.

We hadn’t been drinking, aside from a few brunch mimosas, but an uneasy queasiness was settling in. With all the recent drama involving anthem protests, one false move and we could be eternally vilified. What if we dropped the flag? Or inadvertently took a knee on the field? Worse yet, what if we forgot the words to the anthem?

Needless to say, it was a stressful tailgate. I have long supported Colin Kaepernick and dropping a knee at an NFL arena would go insta-viral, nationwide. But any itch to protest vanished when I saw my Mom’s face after she was handed a folded corner of Old Glory. Not only was this her first Eagles game, it was her 70th birthday. Cherish the thought.

“I hope I make it to an Eagle game before I die,” my Mom had told me earlier in the week. It both shook and surprised me, especially considering my Dad had been a season-ticket holder before his death in 2003. He never took her to a game? Guess not.

I had told Mom we were going to the game, but kept our part in the flag ceremony a secret. Now I was fighting back the tears welling up, much like the tears of social injustice shed by all those kneeling for a better tomorrow. I looked at my girlfriend, Kristin, and dried my eyes on the bright pink Eagles shirt that organizers had given us to wear. In addition to my Mom’s birthday, the NFL was raising awareness for breast cancer — and Kristin is a four-year survivor.

Suddenly, after Kristin and I exchanged a knowing smile, a blissful ray of sunshine crept into the dark, cavernous hallway and created a halo on the flag. It was sublime. Maybe surreal. No, it was perfect — and I was positive my Dad had something to do with it.

There was no time to reflect and we began our march to the south end zone at a frenetic pace, similar to a chaotic dance number from The Greatest Showman. Challenger, the non-releasable bald eagle, excitedly flapped his wings in tune with the Eagles pep band as they pounded their silver drums. Fly, Eagles, fly … on the road to anthem-ry.

A friend of mine had warned me that the whole experience involved a lot of standing around, and he was right. My feet, stuck to the concrete for nearly 20 minutes, felt like thousand-pound bricks, but still propelled me all the way to midfield after whizzing by Stefon Diggs and Adam Thielen. The Linc was filling up and the noise was deafening. Behind me, Jake Elliott was teeing up and booming practice kicks while AC/DC’s Thunderstruck screeched over the loudspeakers.

Turns out, football players are indeed as big as they appear to be on TV. I fumbled for my cell phone, but my trembling fingers could only muster a three-second video. Minutes felt like milliseconds. Everything was at warp speed.

I took my position at the 35-yard line and gripped the largest American flag I had ever held with the strength of 10,000 Kaepernicks. Donald Trump’s divisive hate and dangerous rhetoric had no home here, not in the most patriotic moment of my life. Not to mention my Mom’s landmark birthday or on the anniversary of my girlfriend’s diagnosis.

Mom, Kristin and I stretched the flag wider than a johnnycake, humming in harmony with anthem singer Jessy Kyle – a three-time cancer survivor – and shaking it when she soulfully sang: “O say does that star-spangled banner yet wave … o’er the land of the free and the home of the brave.” We knew everyone had done the right thing when Jason Peters strolled over and gave a fist bump to a man down the flag line.

As a longtime journalist, one who has covered some of the most iconic moments in Philly sports history, I truly believed I had seen it all. I had partied on the field with Joe Blanton and the “World Fuckin’ Champions” in 2008. I had dug my sneakers into the turf in Buffalo where Randall Cunningham once threw “The Pass.” And I had cried with Allen Iverson at his Sixers retirement ceremony. This was different, however. This was truly “Philly Special.”

There are certain moments in life that need a permanent pause button. Not play or rewind, simply pause. Holding the American flag at an Eagles game is one of them. I’m not sure how many stitches were in that flag we paraded around the Linc, but it certainly felt like much more than one million. 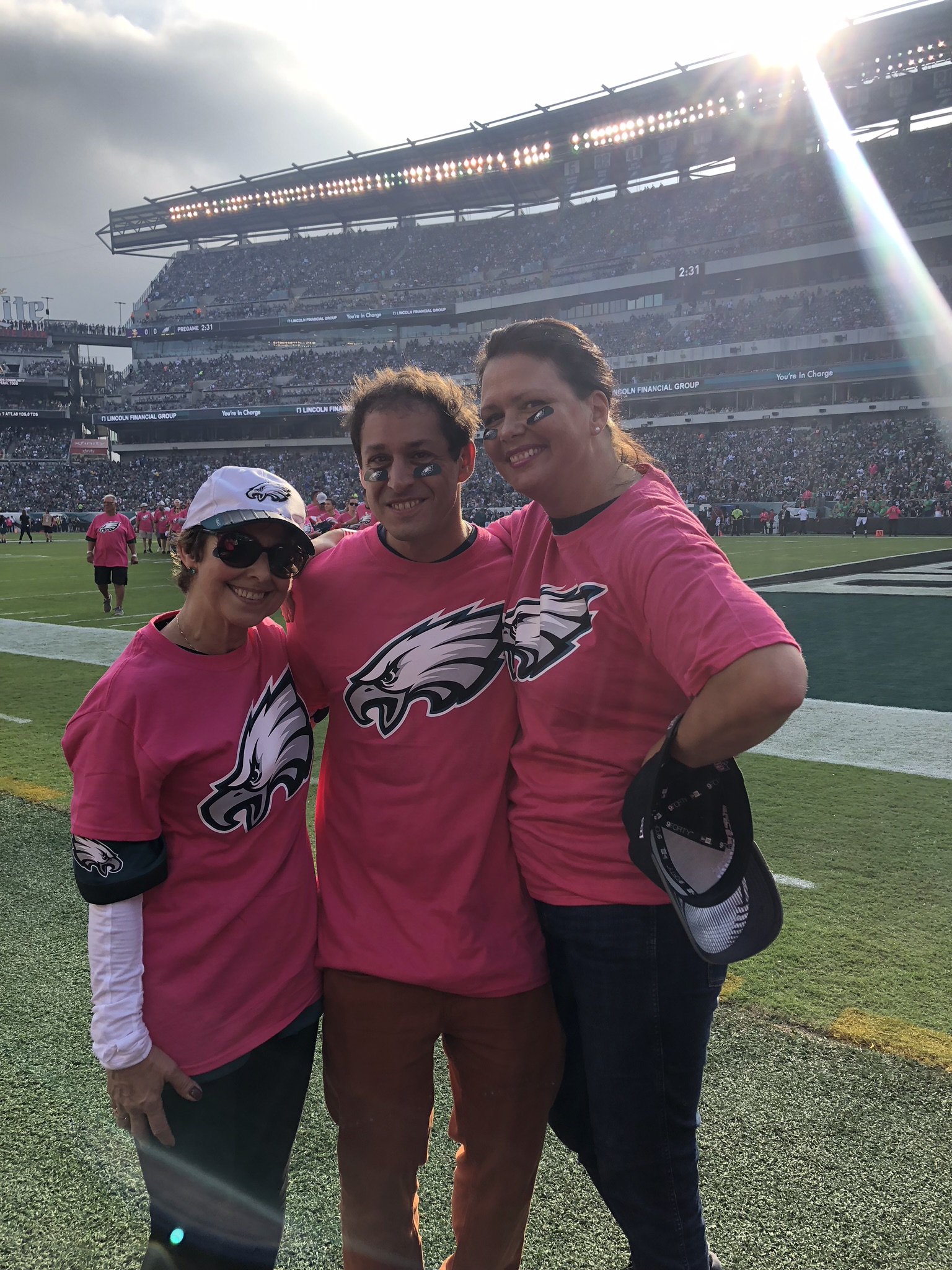