The last time I checked, no team has ever won a Super Bowl in March. Reggie White was the greatest free agent acquisition in NFL history. Four years later – almost half a decade after signing with Green Bay – he won a Super Bowl.

“Jeffery is ninth among wideouts in both cumulative receiving yards and receiving yards per game, despite having Jay Cutler as his best quarterback in that time,” writes ESPN analyst Bill Barnwell. “With him having just turned 27, there’s plenty of reason to think Jeffery will rank among the top half of starting NFL wide receivers.”

It’s an optimistic outlook shared by many of the talking heads. But Jeffery just doesn’t do it for me. I know. I’m a hater. At least that is what my friends’ social media feeds tell me. Most of the diehards I know are more ecstatic than a coal miner at a Donald Trump rally. Some are treating Jeffery’s arrival in Philadelphia as a coup of sorts, drawing parallels to the great “Terrell Owens Heist of 2004.”

Hang on, Sloopy. Jeffery is not TO.

In fact, he’s shown no evidence he can ever be a true No. 1 receiver at the professional level. Jeffery has largely padded his stats playing alongside a future Hall of Famer.

Let’s examine what we know.

In 2013, Jeffery was heavily reaping the benefits of lining up opposite Brandon Marshall. He qualified for his first and only Pro Bowl that year, replacing injured starter Calvin Johnson as a substitute, after hauling in 89 balls for 1,421 yards.

Jeffery’s 2013 campaign was prolific indeed. Playing in relative obscurity, as opposing teams rolled coverage to protect against Marshall, Jeffery ranked sixth in the NFL in yards and 10th in receptions. In the two years he teamed up with Marshall, Jeffery broke records while compiling 2,554 receiving yards on 174 catches.

However, Marshall bolted for the Jets in 2015 and left Jeffery as the top option in Chicago. As former Eagles great Brian Dawkins is fond of saying, “The best ability is availability” and Jeffery just couldn’t stay on the field once Marshall’s shadow vanished. 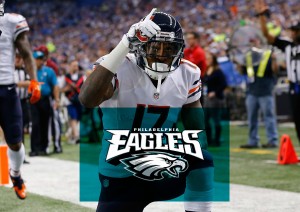 Will the former Bear Jeffery be a real No. 1 in Philly?

In 2015, Jeffery played in just nine games as he battled through a myriad of injuries. Then, in 2016, he missed the first four games of the season due to an ill-advised suspension for performance-enhancing drugs.

“Alshon will be a nice edition for the Eagles, but honestly I’m not sure he’s really a pure No. 1 wide receiver,” lifelong Bears fan Matthew Prowell said. “He’s a fantastic ‘go-up-and get-it’ guy with superb hands. The Eagles are pushing him as a true No. 1, but I’ve never seen him take over a game and be an absolute beast.”

On the surface, Jeffery is exactly what the Eagles needed. A sure-handed target who can hopefully bail Wentz out of trouble, especially in the red zone. He’s certainly not Brandin Cooks, the 23-year-old wunderkind that was initially linked to the Eagles until the Patriots made the Saints an offer they couldn’t refuse. But the 27-year-old Jeffery is fairly young and has an intriguing opportunity to build a strong relationship with Wentz for many years to come. Again, if he can stay healthy and out of trouble.

Remember, there were similar expectations put on the broad shoulders of Dorial Green-Beckham. Despite off-the-chart athleticism, the latter could never put it together. The difference is Jeffery has proven he can transfer his immense talent to the NFL The challenge will be adjusting to being “the guy” in the pressure cooker that is Philly.

The Curious Comparison of Alvin Harper

When I first heard that Jeffery had landed in the Eagles’ nest, a picture of Alvin Harper galloping into the end zone popped into my head. Harper was the yin to Michael Irvin’s yang at the height of the Cowboys’ dynasty. In 1994, Harper led the entire NFL in yards per reception (24.9) while accumulating 821 yards and eight touchdowns.

Much like his modern-day counterpart, Harper often found himself in single coverage since Irvin was the focal part of the offense. In back-to-back NFC Championship games against the 49ers, it was Harper – not Irvin – responsible for securing the game-winning highlight-reel play: He caught a 70-yard slant route to seal the deal in 1992; and scored on a 42-yard touchdown in 1993.

Perhaps Harper’s greatest asset was his knack for the spectacular. A former high school hoops star and state-record holder in the high jump, Harper knew how to go up and get the football – and throw down a leaping spike through the uprights afterward.

Check out the highlights on this one-handed catch and a  slant route against the 49ers.

Here are two scouting reports. One is for Harper; the other is for Jeffery. Which is which?

“There are concerns about his explosiveness and ability to separate from coverage, but he has top-shelf ability to play the deep ball, thanks to elite hands and body control. He is an explosive jumper with an impressive frame …”

“Good size at 6-3 and 205 pounds, high jumps 7-2, good speed and fluid acceleration. The knock on him is that he goes over the middle reluctantly.”

Pretty much interchangeable, right? (As you probably guessed, the first one is for Jeffery and the second for Harper.)

In terms of measureables, the two are almost identical:

Jeffery’s upside is his best side

On first look, I hated the Jeffery signing. I didn’t understand paying a receiver with so many question marks elite money, even on a one-year deal. It was originally reported that Jeffery would be getting $14 million. (To put that in perspective, Antonio Brown is the NFL’s highest paid receiver at $17 million, followed by AJ Green at $15 million).

However, a deeper dive into Jeffery’s contract has debunked that original report as “fake news” or expert spin from Jeffery’s agent. Jeffery’s one-year contract with the Eagles will actually pay him $9.5 million, with $4.5 million in incentives that will be fully reached only if Jeffery makes it to the Pro Bowl.

Translation: Jeffery has a lot to play for – and the early reports say he is already bonding with his new signal-caller. Always a good sign.

When you consider that price tag, it’s hard to argue with the move. Simply stated, it makes sense for a franchise in dire need of playmakers at the skill positions.

The reality of the situation is there is no DeLorean blasting Huey Lewis music that we can rev up and use to go back in time. Here we are, already “back to the future.” Hey, we could do a lot worse than investing in a 6-foot-3 leaper with incredible hands and an early crush on his starting quarterback.

“I told him [Wentz] my job is to help him win the MVP, which I truly believe,” Jeffery told the Inquirer. “Sky’s the limit for him. He’s a great quarterback.”

Still, Eagles fans should be increasingly concerned about the patchwork quilt that Eagles general manager Howie Roseman constantly weaves. He never seems to have a plan, choosing flash over substance. He never appears able to identify talent, whether in free agency or in the draft. As the Eagles were drying the ink on Jeffery’s contract, their division rivals in New York were introducing Brandon Marshall.

Jeffery’s old pal from Chicago will team with Odell Beckham Jr. and Sterling Shepard to form one of the most formidable receiving corps in recent memory. That unit was assembled thanks to smart drafting from a forward-thinking front office, something severely lacking at the NovaCare Complex.

The Giants were able to add Marshall as a final piece, whereas the Eagles added Jeffery and fellow newcomer Torrey Smith as band-aids to fix botched experiments, such as Green-Beckham and Nelson Agholor. Yes, botched. Maybe infected.

Jordan Matthews? Well, the jury is still out on the third-year receiver, although he has shown flashes of brilliance. Matthews is a talented slot receiver, with two highly-skilled veteran targets now flanking him to the left and right. Bottom line, the cupboard is no longer bare.

Even with so much optimism, these moves reek of desperation. Roseman reminds me of a confused fantasy football owner trying to salvage his “keeper” franchise.

If Roseman has shown us anything in his tenure here, it’s that he revels in the spotlight. He slapped on his camouflage cap and beamed with pride after piecing together the so-called “Dream Team” in 2011, only to watch it fizzle faster than a worm-burner from Donovan McNabb. Will the 2017 edition suffer a similar fate?

Roseman has never been and never will be a “football guy.” His mind control over owner Jeffrey Lurie should be studied and vaulted in a Ripley’s Believe It or Not exhibit. That being said, if his latest mind trick works, then Eagles fans of all shapes and sizes will be building the shaky GM his own museum outside Lincoln Financial Field.