It’s been almost five years since Northeast Philadelphia’s Dave “DJ” Brunelli last stepped into a professional boxing ring. But the sport remains a part of him. Last Friday in the Wells Fargo Center in South Philly during Wing Bowl 22, in front of a capacity crowd, his inner brawler came out as he ate.

The 38-year-old Parkwood resident tenaciously devoured nearly 150 wings during the 14-minute opening round, setting up quite the scene for round two as he eyed his first Wing Bowl title in his fourth time in the event over the last five years.

“I was right there through the first round,” said Brunelli, aka Tiger Wings N Things. “I thought I had a good shot at being the top local eater this year.”

At 146 wings eaten to that point, Brunelli was only two off the pace for first place and one of just seven local contestants (out of 20, including Eagles Pro Bowler Jason Kelce) to advance to the second round, another 14-minute affair. Trailing only three-time Wing Bowl champion Jonathan “Super” Squibb of Berlin, NJ, Brunelli estimates that he ate at least four plates in the second stanza, giving him what would have added at least 80 more to his tally and would have still left him behind only Squibb leading into the event’s two-minute finale.

To watch Brunelli eat, it’s hard to decide whether he eats more like a tiger or a boxer. He inhales his food as if it were actually prey, taking quick massive bites. But the more wings he would eat as the minutes passed last Friday, the slower he would eat them.

“I started to slow up the second half of the second round,” Brunelli said. “I was really struggling. I almost came to a halt at one point.”

Frequent rubs to his stomach signaled the grub wasn’t sitting too well. Still, he responded to the adversity much like you’d expect someone to compose one’s self within the squared circle. As his eating became less and less he became more energetic, standing up from the long table and, as would be akin to his days between the ropes, bouncing light on his feet as if he were coming out of the corner — the fighter in him simply could not rest.

“Boxing is just second nature to me; mentally, I’m trying to move things along at that point and drown out what’s going on around me. When I stood up I started to feel a little weary, so I sat back down.” 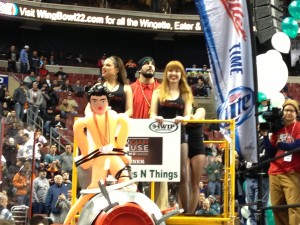 Dave “DJ” Brunelli enters on the first float of Wing Bowl 22 last Friday. A mock broadcast booth, the rubber doll affixed to a cannon was his entourage’s “goodbye” to Chris Wheeler. -photo by Joe Darrah

Only briefly. He was soon standing up again, more bobbing and weaving his way through the frame’s waning moments than anything else. His swigs of bottled water, a natural ally to any competitive eater, became more frequent than his bites at about a 3:1 clip as the round reached the two-minute warning.

“[At that point] I started to feel the sickness coming on,” he said. All the while the carnivorous race to the proverbial finish line ensued, and as the mad dash among the top local contestants (as well as three from the out-of-town group, from which it had become increasingly apparent the overall winner would be named and earn the $22,000 grand cash prize), Brunelli refused to shut himself down.

“I was fighting it the whole time there,” he continued, “because I knew I was right there with Jon through the first round.”

By the time the clock reached just about 30 seconds remaining, everyone in the building knew that Brunelli was also up against nausea. His bouncing ceased, he balled up a barbecue sauce-stained napkin and tossed it to the table. An apropos white towel, it was not.

His hands pressed firmly against the table as if willing digestion to start its course, Brunelli was likely well on his way to qualifying for the next stage if he could keep down everything he had downed to that point through the last five-minute intermission. As the 10-second countdown began it became apparent that the gravity of the situation wasn’t helping. The sounding buzzer might as well have also been a release valve. Brunelli cupped his mouth as the brownish vomit shot through his fingers like a geyser.

“That was a little ridiculous; it was nice burst,” Brunelli said, able to laugh it off in hindsight. “I had it come up on me once and I fought it back down, but that last time was pretty intense — there was no stopping it.”

As for what it actually feels like to make such a withdrawal as compared to traditional upchucking: “It was painful knowing that I lost, but at the same time you feel a lot of relief there. That’s a lot of pressure you’re feeling before that.” 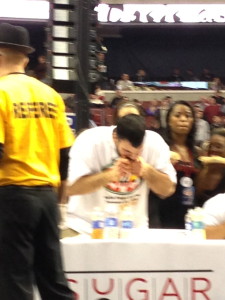 Dave Brunelli, aka Tiger Wings N Things, chomps down during round two of Wing Bowl 22 at the Wells Fargo Center. – photo by Joe Darrah

Though the aptly defined “you heave, you leave” rule disqualified his earning an official number, Brunelli calculates that the only local who could have potentially beaten him leading into a third round would have been Squibb, a personal friend with whom he has partnered and won annual wing-eating relay races in Wildwood, NJ, the last three years. At 20 wings per plate, the four servings that Brunelli ate in the second would have easily helped him surpass the 208 eaten by Jersey residents Dave Goldstein “US Male” of Voorhees and Richard Franceschi “Uncle Rico” of Franklinville (at least going by the volatile numbers that are so fiercely tabulated during the contest) and pitted him ever so close to Squibb’s final count of 238, which again won in the local class and earned him fourth overall. Omaha, NE, resident Molly Schuyler’s 363 wings not only won the overall challenge, it set a Wing Bowl record. Chicago’s Patrick Bertoletti took second overall with 356. University of Pennsylvania football player Sebastian Jaskowski won the inaugural college challenge (and a new car) with 78.

“There was a lot more competition this year — more out-of-towners and world-class eaters,” Brunelli said. “I didn’t honestly expect to be able to stay with all those guys. Patrick lost Wing Bowl one time by just one wing to Joey Chestnut. He was the No. 2 eater in the world at one time. Jamie (James McDonald, “The Bear”) won it last year and is an astounding eater. Molly is just unbelievable. And I know how tough Jon is because we’re three-time champs in Wildwood. I just feel like I can’t get over the hump at Wing Bowl. The hardest part is that you’re stopping and starting again, and having such a long time limit is tough. These are wings that you’re eating right off the bone, and most [eating] contests are only 8-12 minutes long overall.”

One who today eats in more than 30 annual competitive events, eating a range of food from peppers to bread pudding and traveling as far as Sacramento, CA, where he won the state’s corndog-eating contest in 2013, Brunelli considers himself more of a speed-eater. He thrives in contests that require you to engulf a particular “meal” as fast as you can while contestants try to beat each other’s time. Take, for instance, Jake’s Wayback Burgers’ national contest, which he won this past September by swallowing a nine-patty burger in 30 seconds. (Check out the video here; there’s hardly any chewing involved.) In 2013 he also took second to Takeru Kobayashi in Manhattan’s famous hotdog eating contest, eating 34 dogs in 10 minutes — good for $5,000. However, he humbly admits the distance to first place in acknowledging that Kobayashi “totally destroyed” him by managing 67.

That’s because Brunelli is humble, for as physically imposing as he is at 6-3, 250 pounds.

A one-time standout wrestler at his alma mater Abraham Lincoln High School in the Mayfair section of the Northeast, Brunelli’s fighting roots date back to the now defunct (at least in Pennsylvania) Tough Man Contests, which pitted fighters in the ring but did not adhere to boxing rules. When that opportunity dissipated, Brunelli jumped at a chance to box professionally, staring in 10 main events (four locally), most as a heavyweight. In 2006 he fought on the undercard for a Bernard Hopkins bout in Atlantic City. He also once fought in the Spectrum in one of the building’s last events in 2007. During his five-year career, he went 8-5, mostly as a heavyweight. He last fought Apr. 3, 2009, at Philly’s Blue Horizon before hanging up his gloves to have more time and more healthy years for his two young children. He recently welcomed a third child, 8-month-old Nico, his second son behind 10-year-old Arturo and 7-year-old daughter Sophia.

“I made the decision that my kids were the most important thing,” he said. “If something would have happened to me, there wouldn’t be much for them to fall back on. But I enjoyed my time as a boxer and I still had the itch to compete in something. I needed something to compete in. I love competition.”

It helps that they get a kick out of his eating career, too: “My [oldest] son is real into it and knows a lot of the eaters’ names,” Brunelli said. “He doesn’t like to watch me eat live, in fear of me having a reversal, but he likes to watch videos. He says he wants to do contests himself, but definitely does not want to be a competitive eater. My daughter is not so interested, but she likes when I win.”

It just so happened that he had already delved into the eating foray at the time his boxing time neared its end, previously competing in a Philly Soft Pretzel pretzel-dog eating contest and winning it. (To date he has won six straight.) Brunelli would go on to fight twice more before retiring, the transition being aided by the peek physical shape that he was in as a boxer.

“Being in shape helps, it’s definitely a plus toward eating,” Brunelli related. “As a heavyweight I didn’t have to watch myself too much with eating. My last fight I had to drop down to cruiserweight (between light heavyweight and heavyweight), and that was the only time I had to watch my weight. But it wasn’t a big deal.”

As Wing Bowl continued to increase in popularity around the city, his interest in getting into similar, more challenging competitions became more piqued.

“The Wing Bowl was one of my first major eating competitions, and I did pretty well my first year,” Brunelli said. “I’ve been competing in events all over the country ever since.”

This Sunday, he’ll participate in a sandwich contest at Paesano’s Sandwich Bowl, one of many local events that have surfaced in light of Wing Bowl’s popularity. The prize: tickets to a Flyers suite. His Wing Bowl-qualifying stunt should prove to be a bit of a primer for the up to 22-oz sandwiches he’ll have to take down this weekend. In December, he at a nearly six-pound Sicilian tomato pizza in 12 minutes to get into the annual event. A sure-fire achievable accomplishment for a guy who once gobbled up 131 Irish potatoes in eight minutes in yet another contest down the shore, the pizza was only supposed to weigh four pounds.

“But when they brought it to me it was a pound-and-a-half over,” Brunelli said. “We had to go with it though because there wasn’t enough time to make another one and they weren’t going to shave the pizza or the time down. The last couple of slices were pretty dicey.”

He fought the urge. There will be other opportunities to do the same.