Saint Joseph’s University mourns the loss of legendary basketball coach Dr. Jack Ramsay ’49, who passed away overnight at his home in Naples, Fla., at the age of 89 after a decade-long battle with cancer.

One of the greatest teachers in basketball history, Dr. Ramsay, known affectionately throughout the basketball community as “Dr. Jack,” made his mark in the collegiate and professional ranks, and more recently as a broadcaster, up until his retirement.

He began his affiliation with Saint Joseph’s as a member of the Hawks’ teams of the late 1940’s, which were coached by Bill Ferguson, and went on to earn his doctorate in education from the University of Pennsylvania.

Dr. Ramsay began his coaching career in 1955 when he took over as head coach of the Hawks. Over the course of 11 seasons at Saint Joseph’s, he amassed a 234-72 record (.765 winning percentage) and guided the Hawks to five straight NCAA Tournament appearances and nine consecutive postseason bids,  both of which are school records. 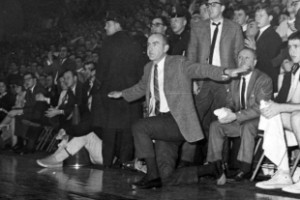 His 1961 team made the school’s only appearance in the NCAA Final Four and the 1965-66 Hawks were chosen as the preseason number-one team in the nation by Sports Illustrated.

Dr. Ramsay also played baseball for the Hawks for one season and served as that team’s head coach from 1956 to 1958.

After leaving Saint Joseph’s following the 1966 season, his first position in the professional ranks was as general manager of the 1966-67 Philadelphia 76ers. That team won the world championship and is considered one of the most dominant teams in NBA history.

As a head coach in the NBA, Dr. Ramsay won 864 games in 21 seasons and guided the Portland Trailblazers to the 1977 title.

His combined total of collegiate and professional victories is 1,098, one of the highest ever in the sport of basketball.

Dr. Ramsay’s received the highest honor in the game when he was inducted into the Naismith Memorial Basketball Hall of Fame in 1992.

A member of the Saint Joseph’s Athletics Hall of Fame (1999), SJU Basketball Hall of Fame (1974) and the Philadelphia Big 5 Hall of Fame (1974), Dr. Ramsay was furthered honored by the University in 2009 with the naming of the Ramsay Basketball Center. The Ramsay Center, which is adjacent to Hagan Arena, houses the SJU men’s and women’s basketball programs with offices, locker rooms, study spaces and a film room.