October 17, 2013 Comments Off on Bryzgalov Doesn’t Hate You, Philly — Just a Few Journalists

You never know who you’ll see at the rink when it comes to youth hockey. My older son has played against Ian Laperriere and Danny Briere’s son. My younger son, who is a Mite (8 and younger) faced Vladislav Bryzgalov — yes that’s Ilya Bryzgalov’s son — during a hockey tournament in Aston. His Hatfield IceDogs squared off against little Bryzgalov’s Jags.

We actually shared the locker room with the Jags, which is uncommon. Everyone tried to ignore the white elephant in the room, except for my son, Milo.

“Hey, Bryzgalov, what are you doing here?,” he asked, which made Bryz feel about as comfortable as Sidney Crosby is in the slot.

Bryz actually warmed up and spoke with the kids and some of the parents. I couldn’t help but mention that we have a mutual friend, Randy Miller, a pesky journalist who has irked a number of athletes, such as mild-mannered Aaron Rowand and the eccentric Bryzgalov. 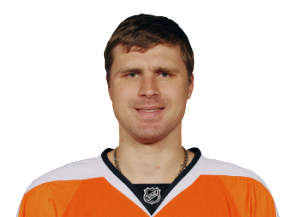 When I pressed the issue and asked, “Do you know Randy Miller, the journalist?” Bryz changed his tune, saying, “Yes, Randy Miller is a journalist I’m trying to forget.”

Bryz stared at the ground and muttered, “Yes, Randy Miller is a terrible human being.”

On the lighter side, my son Milo scored a goal on Bryzgalov, who sports his father’s No. 30 and wears his helmet.

After the game I said to my son,”‘You scored on Bryzgalov.”

“No, I didn’t,” Milo said. “I scored on Bryzgalov’s son. Bryzgalov is so big how could anyone score on him?”

That led to a long discussion about five-hole goals. In the postgame locker room, the Bryzgalovs sat next to Milo. Young Bryz was singing and he asked Milo if he liked music.

“Sure, I just wrote a song called ‘Bucket of Blood,'” exclaimed Milo.

“Does that sound anything like my favorite song, ‘We Are The Champions?'” Vladislav Bryzgalov asked.

I couldn’t help but ask how he knew the Queen song.

Funny stuff since Bryz will never hear that song blaring out of arena’s speakers while in net. Funnier yet, Bryz approached Milo after the game and offered some of his goofy humor.

“Great game, number 88,” Bryzgalov said to Milo. “Now let me ask a question, are you a member of the Ice Hogs.”

— Ed Condran is a freelance reporter and longtime journalist, who has worked for a variety of publications, including Metro Philadelphia, Rolling Stone, Playboy and Maxim.

Flyers Being Sued By Trainers Over Cancer Diagnoses