‘We’re From Philadelphia And We Fight’

December 23, 2013 Comments Off on ‘We’re From Philadelphia And We Fight’

The “Dallas Sucks” chants erupted with 2:56 left in the first quarter Sunday night at the Linc. Yes, Philadelphia, there is a Santa Claus — and he’s gift-wrapped a dream, winner-takes-all matchup next week against the Cowboys. 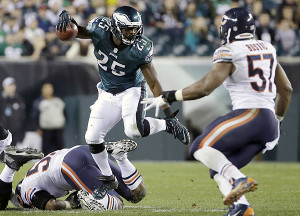 LeSean McCoy rumbled for 133 yards and two TDs against Chicago.

After Dallas eked out a 24-23 victory over the Redskins early Sunday afternoon, the Eagles could have rested their starters on Sunday Night Football.

Instead, head coach Chip Kelly chose to keep his foot on the gas and watched his team explode for 21 points in the first quarter en route to a 54-11 win. In fact, backup quarterback Mike Vick didn’t enter the game until there was 6:24 showing in the fourth quarter.

“Very simply, we’re from Philadelphia and we fight, that’s it,” said Kelly. “If there’s a game on, we’re playing, end of story. All this stuff about backing in, not worrying about things, I have no idea … so many different scenarios, there could have been a tie [against Chicago], if there’s a tie when we go play Dallas next week, after we gave a game away last week … if we’re going to line up and kickoff, tell us what time to show up and we’ll be there.”

So it all comes down to this, a must-win game in a hostile environment against a bitter, bitter rival. The football gods – or maybe the ghost of Andy Reid – couldn’t have planned it any better. Kelly will make his first trip to Dallas as an NFL head coach with the NFC East championship on the line. Bring it.

“The playoffs start a week early for both teams,” said Kelly. “If you win, you get an opportunity to keep playing. If you lose, you’re going home.”

Okay, take a moment and breathe it in. It’s real. Scratch last year’s 4-12 embarrassment from your memory bank. Just like the Alicia Keys’ anthem, “New Day” — a song that blares loudly at the Linc before players take the field for warm-ups — the Eagles live in the moment.

And when that moment is over, they turn the page with all the ease of Justin Timberlake hosting “Saturday Night Live.” That’s quite a departure from 2012.

“Although we did have a poor season last year, throughout the offseason, with the way Chip [Kelly] did things, the way the organization evolved, the way everybody was excited, we were fully prepared to have a really good season,” said center Jason Kelce, “and to tell you the truth, going into the season, I would have thought we were in better position than we are right now. If we had been playing the way we have been for the past seven weeks that might be a little bit different, too.”

So, what changed in less than 365 calendar days?

“It’s not one thing. It’s the overall culture, the overall innovation,” said Kelce. “Like I said, I go into every season expecting big things – last year, I expected to win the Super Bowl — that’s just the way, I think, as a player, you have to be built to be successful.”

Against Chicago, all the mistakes from last week’s bizarre loss in Minnesota were corrected. Long kickoffs were the norm Sunday night. LeSean McCoy (18 carries, 133 yards, two TDs) was back breaking ankles, especially in the screen game, with Kelce leading the sleigh ride. Nick Foles (21-of-25, 230 yards, two TDs) resumed his Peyton Manning impersonation, too.

And the defense nearly doubled their sack output, from three to five, thanks to three sacks from Trent Cole. There’s watching game film, then there’s chopping it up and dissecting it reel by reel, frame by frame, down to its plastic core.

“This is a one-week deal,” said Kelly. “I know I say it and I sound like a broken record, but you come back to work when you win and you get better – and when you lose, you try to get better. That’s the deal, and that’s what this team is all about.”

Well, time to unwind that reel and enforce Nick Foles’ so-called “24 Hour Rule.” Beating Chicago in a meaningless game was great, but now it’s Dallas Week, and beating Dallas is all that matters in this town. Ask Andy Reid about that.

“The first time we played them [Dallas], I went up to a McDonald’s up the street before the game,” Reid recalled back in 2008. “I had a little breakfast burrito. There was an 80-year-old lady, or somewhere thereabouts, in there. She saw me come in and she got after me. She said, ‘Hey, you better kick their ass.’ She looked like a normal grandmother. And I thought: ‘OK, this is the real deal.'”

The education of Chip Kelly marches on Sunday at Cowboys Stadium — and this one is as real as it gets. There’s suddenly a palpable buzz about the Birds back in the city of Philadelphia.

“When you don’t win, even if you have an amazing game, you don’t get the full effect of really enjoying the type of success you’re having,” said McCoy. “Whereas now the stadium is sold out … we’re going to Dallas after a big win, we’re winning games, the feeling is different … the city is going crazy right now, Eagles wow, so there’s a difference … you can feel the difference and enjoy it.”

And right before McCoy walked out of the locker room, he winked at reporters and exclaimed, “See y’all in Dallas.”

This story first appeared in the online edition of Metro Philadelphia. It has been re-published for PhillySportsJabronis.com.