It was a light day at Eagles training camp Thursday. Chip Kelly’s squad snuck in a third joint practice with the New England Patriots, but it was a practice disguised as a walk-through. The session featured mostly special teams work, mixed in with some 7-on-7 work. However, not everyone was out there. DeSean Jackson and Damaris Johnson sat on the sbideline — and defensive backs didn’t even attempt to deflect or intercept footballs. Anyway, here’s what we noticed:

» Start Vick up. The quarterback mystery is over, at least for now. Chip Kelly announced that Mike Vick will be under center for the first offensive series. The coach warned everyone not to read too much into it. It was Vick’s turn in the rotation, meaning that if it was a normal practice day, he would be out there first with the ones anyway. Kelly noted that Nick Foles will start next week’s preseason game. Expect between 12-20 snaps each for Vick and Foles against New England.

» No slow Polk. For the second straight day, Chris Polk took reps with the first-team offense. The running back finally looks healthy and is turning quite a few heads at camp with his speed and agility. Don’t be surprised if he beats out Bryce Brown for the backup job behind LeSean McCoy.

» Secondary helpings. For much of practice, the Eagles threw out three cornerbacks (Brandon Boykin, Curtis Marsh, Bradley Fletcher) and just one safety (Patrick Chung) in their base defense. Marsh and Fletcher played on the outside, with Boykin taking the slot. Afterward, Kelly said that Boykin and Fletcher are his starting corners for Friday’s game, with Chung and Nate Allen getting the nod at the safety positions. However, he admitted that new defensive coordinator Billy Davis likes the three-cornerback look.

» Bye, bye Kelly. Before practice even started, reporters learned that second-year tackle Dennis Kelly is out for the rest of the preseason. Kelly underwent back surgery this past Monday, but he expects to be ready for the season opener. That means journeyman Allen Barbre will get an extra long look Friday. He’ll start at left tackle with Jason Peters out. Rookie Lane Johnson is penciled in at right tackle. 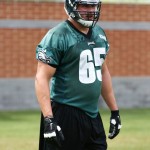 » Salas, Salas, Salas. It’s no secret that Greg Salas is enjoying a very good camp. Credit the rash of injuries at the wideout position or maybe the 24-year-old has been overlooked in the NFL. He made the play of the day Wednesday when he hauled in a one-handed, 40-yard grab. Overall, Salas hasn’t dropped much, if anything. He also runs crisp routes. Keep an eye on him Friday night. He’ll get plenty of snaps, plenty of chances to earn a roster spot.